They were the very first settlers. They were Mr. A.W. Ormond and his daughter Mary. They built a log cabin near the water at Spring Bayou and the year was 1876. They were rather alone, but one year later they got company. A small scale adventurer with the name J.C. Boyer came sailing into the Bayou and quite soon J.C. and Mary were married. End of chapter one.

Mary enjoyed watching the big tarpon fishes jumping up from the water.  So 1876 she named this small settlement Tarpon Springs. Nice name, even if the fishes were not Tarpons, they were Mullets…

Hamilton Disston came from Philadelphia. His father, Henry Disston, was the head of the Keystone Saw, Tool, Steel, and File Works. The reason Hamilton came down to Florida was to cure his ailing health, during the harsh winter periods, up north.

In 1880, Hamilton Disston bought four million acres of the central west coast of Florida from the Governor for 25 cents an acre. This saved the state from bankruptcy. Included in the purchase was Tarpon Springs. Through the efforts and investments of Disston, Tarpon Springs was fashioned into an exclusive winter resort for wealthy Northerners.

In 1887, Tarpon Springs was incorporated. It had a population of 52 residents. John Cheney, a promoter associated with Disston, discovered money could be made by harvesting the sponges growing in the waters of the Gulf. Although Tarpon Springs was successful as a resort, it wasn’t long before the sponge industry became the community’s most important industry. 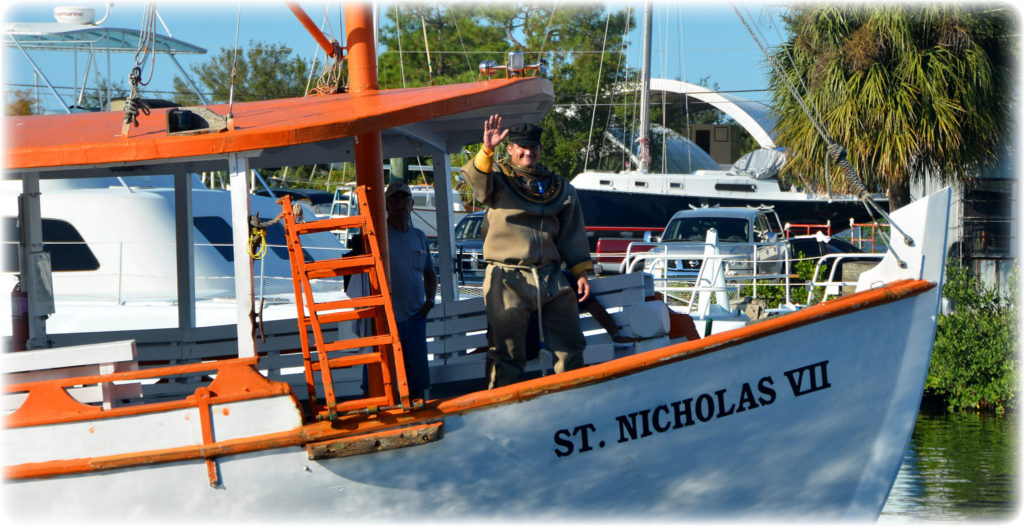 By 1890, the sponge industry was firmly established in Tarpon Springs. In the next few years, experienced divers from Greece were brought to Tarpon Springs. By using rubberized diving suits and helmets, they increased harvests. By 1905, over 500 Greek sponge divers were at work using 50 boats.

The early sponge divers created a need at the docks for eating places for the boat crews. Then as news of the industry grew, people began coming to the docks to see the sponges. Shops opened so people could buy the sponges and other souvenirs.

With the perfection of deep-sea diving equipment, the dollar amount of sponge harvests continued to increase. Divers were able to go deeper into the sea for longer lengths of time. For 30 years, the sponge industry was the largest industry in Florida—larger than citrus or tourism. Tarpon Springs was known as the “Sponge Capital of the World.”

In the 1940s, blight reduced the growth of sponges. By the 1950s, sponging as a profitable industry was nearly wiped out. However in the 1980s, new sponge beds were found. Now, Tarpon Springs is back to being a leader in the world’s natural sponge market.

All aspects of the sponge industry are available to view in Tarpon Springs, from the harvesting of the sponges, all the way to the auctions that are now held weekly at the Sponge Docks.

In addition to seeing the history of sponge harvesting, visitors can experience the Greek influence. Greek restaurants and shops are scattered throughout the area. Seafood, Greek salads, and pastries are particularly popular. Many visitors attend Greek Festivals. St. Nicholas Greek Orthodox Cathedral was modeled after the great Byzantine cathedrals such as St. Sophia Cathedral in Constantinople and is open daily to visitors.

To visit and cover Tarpon Springs is an easy one-day trip from St Pete. Because the part of interest is gathered to one street: the Dodecanese Blvd. And you don´t have to look for it: just follow the traffic! On one side of the street you have the water with the sponge boats; on the other side you have all these shops and restaurants. And of course, visits from tourists are what they live from (apart from the sponge business). But they have also managed to preserve an honest feeling of the Greece culture. You recognize the typical blue and white colors on the buildings and the food is really very good and “Greekish”.

Tarpon Springs is a small but very tight community. Apart from the commercial motives, they have really managed to keep their culture alive. Their church keep their beliefs alive, the young generation still honor the Greek family values. So coming to Tarpon Springs is really spending one day in Greece!